The Sony A7s is the third variant of the A7 family, and for sure it is the most extreme: it has a 12 megapixels sensor that promises unparalleled high ISO performance. I have used it during a long trip to Iceland to do a "real world" test by using the camera in the most difficult conditions: harsh environment and very low light! 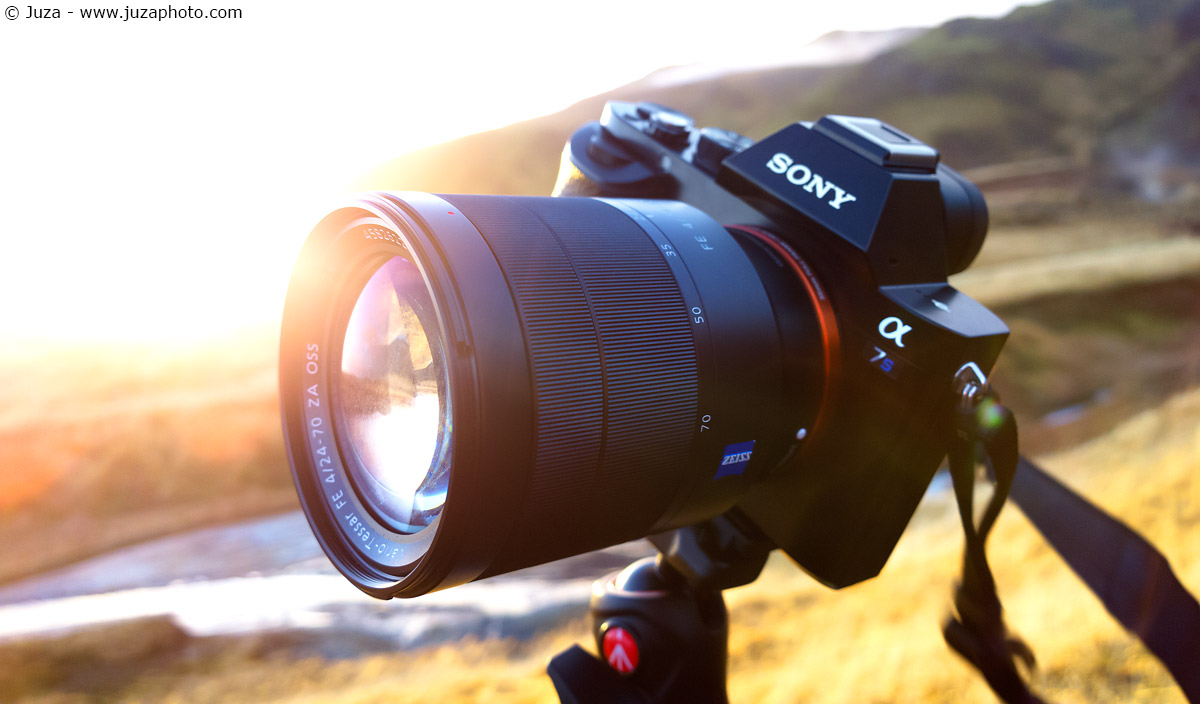 By today standard, 12 megapixels seems a quite low resolution.... or not? You will be surprised so see how large you can watch or print these photos: even at 50x75 centimeters, it is very difficult to see the difference with higher pixel count cameras. The photos taken with the A7s are sharp and rich of details; the only time where I felt the need of more megapixels has been when I had to crop a couple of images, but if you don't crop 12 megapixel are more than enough for most situations.

The very positive side of a 12 megapixel, fullframe sensor is that it offers excellent sensitivity: each photosite (pixel) is bigger so it has more surface to collect the light. Indeed, the Sony A7s has amazing low light capabilities: up to 1600 ISO the noise is so low that you have to look very close to distinguish a photo taken at 100 from one at 1600; even high sensitivities are on par or better with the most professional cameras on the market. From ISO 3200 to 12800 the Sony A7s is on par with the Nikon D4s and the Canon 1DX (and these cameras costs three times as much!); from ISO 25600 upwards the Sony even manages to get cleaner results. If you are looking for the most sensitive sensor on the market, the Sony A7s is the camera for you.

What is the real limit? In practice, for landscape photography, I have used sensitivities up to ISO 12800; at this setting the camera is still fully usable and the noise can be effectively reduced during post processing, even in very dark photos as night photos. For other genres of photography, where the scene is not so dark and the high sensitivity is needed to get a reasonably fast shutter speed, you may even go up to ISO 51200 or, in some situation, to the other-worldly ISO 102400: of course at these sensitivities the noise is clearly visible, but the camera is still usable for reportage, photojournalism, street photography.

Another great thing about the A7S is its dynamic range. In some photos I have managed to extract an amazing amount of detail for the shadows, without any problem of banding or noise: this is another advantage of the 12 megapixels sensor and its huge photosites.

The only issue with the A7s sensor are hot pixels: this camera has a lot more hot pixels than most modern cameras; the issue is clearly visibile for exposures of 10" or longer. The amount of hot pixels is the same both with mechanical shutter and electronic fisrt curtain, while it gets worse with full electronic shutter. It is possible to eliminate completely the hot pixels by using the in-camera dark frame subtraction, that is called "Long exposures Noise Reduction", but this function makes the camera quite slow, since it doubles the shutter speed or every photo taken at 2" or slower SS.

That said, overall I am very positively impressed the the image quality of this camera; it is one the best on the market and the price is relatively affordable.


Shooting in Iceland with the Sony A7s

In the latest months I have used mainly Sony cameras so the design and the layout of the buttons felt quite familiar. The Sony A7 are the smallest and lightest fullframe cameras on the market; it is not as minuscule as my Sony A5100, but it is much smaller than a Canon 6D or a Nikon D750, and it 'disappear' behind a 1DX or D4s. For me the small size and the low weight are very welcome since they makes easier to carry around the camera.

The tilting screen is fantastic; as I have said many times, I'd never go back to a camera without tilting screen...it makes really much easier to frame the photos! Both the screen and the viewfinder benefits from the high sensitivity sensor of the A7s: even in extremely low light, you can still see what you are photographing. When I have shown this camera to some friends, I have brought them in the darkest room of my house, I have turned off all the lights and I told them to look in the viewfinder: all have been amazed to see that the electronic viewfinder and the LCD screen where able to show way more detail than what it was possible to see by naked eye...it is almost like have a night visor!

The autofocus with native lenses (I had the Sony FE 24-70 f/4) is much better than expected: even tough it is not as fast as the phase detection AF of my Sony A5100, it is more than enough for still subjects and it is able to focus even in very low light. That said, if you need super fast AF I'd suggest to wait for the new cameras coming by Sony in 2015, that will offer phase-detection on fullframe sensor. 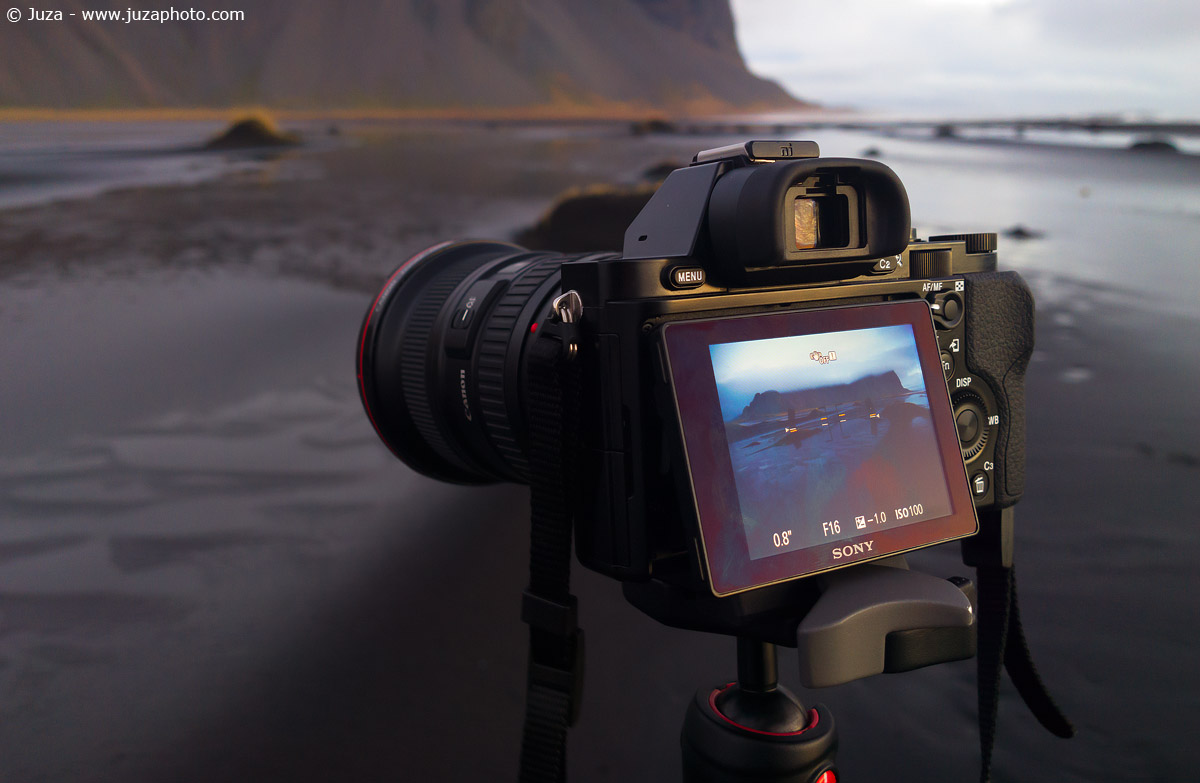 With the metabones adapter and Canon lenses instead I have had a lot more problems. The AF with Metabones is unusable, but I already knew it and for landscapes I use manual focus, so this was not a real issue. A much more serious problem is instead the frequent electronic problem caused with the adapter: many times the camera got stuck and I have to turn it off and on, or even to remove the battery and wait a couple of minutes. These problem happened only with the adapter, while the native Sony 24-70 always worked fine, so it is not Sony's fault.

Battery life is good for a mirrorless camera, it is on par or better than a reflex camera used in live view. I always charged the batteries directly in camera with just a USB cable; this is another thing that I like of Sony cameras.

Since I did not have an external disk, I have been limited to record videos in fullHD instead of 4K; I hope that Sony will remove this limitation (current SDXC card are fast enough for 4K!), but anyway even at 1920x1080p the video quality was fabulous, the best I have ever seen.

The A7s has a moderate weather sealing. In Iceland, for 18 days the camera had to withstand incredibly strong winds (the wind itself is not the problem, the problem is that wind carries dust, sand and salt from the sea); sulphuric vapors of the geothermic areas, small sprays of water and humidity. It survived quite well, until the very last days when the rear dial got stuck. To give an idea of how harsh conditions impact on cameras, 3 out of 5 cameras had similar problems! Two Canon 6D got completely stuck, one when we were shooting in the ice cave in the Vatnajokull glacier and another on the the Jokulsaroon beach. For everyday situation even the light weather sealing of these cameras is ok, but for the most demanding environments a stronger sealing would be welcome.

Now, let's see the 'behind the scenes' stories of some photos taken during this trip! 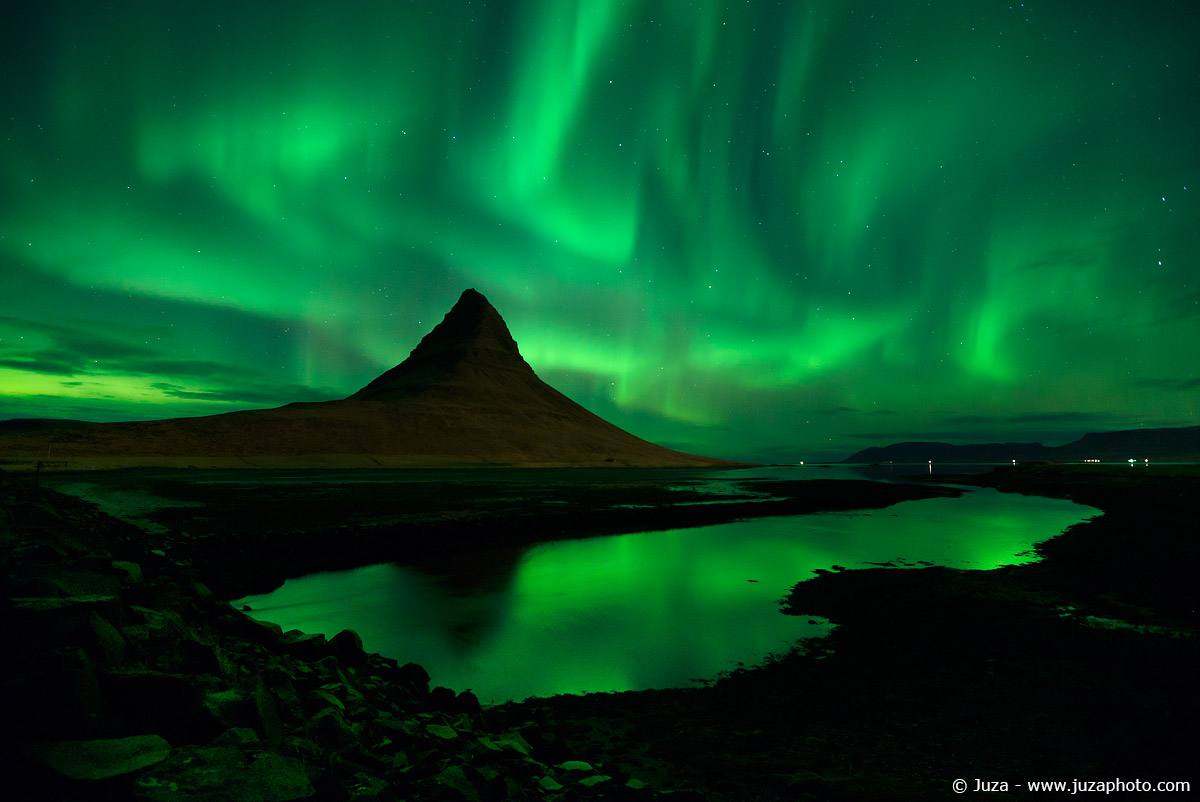 This is one of the most beautiful northern lights that we have seen in Iceland. It was strong enough to shoot at ISO 3200 and to stop down to f/4 for better sharpness; during post processing I have applied some noise reduction and I have increased the brightness of the foreground, that was very dark. I have been positively surprised to see how much detail it was possible to extract from the shadows, even at 3200 ISO, without any binding issue! 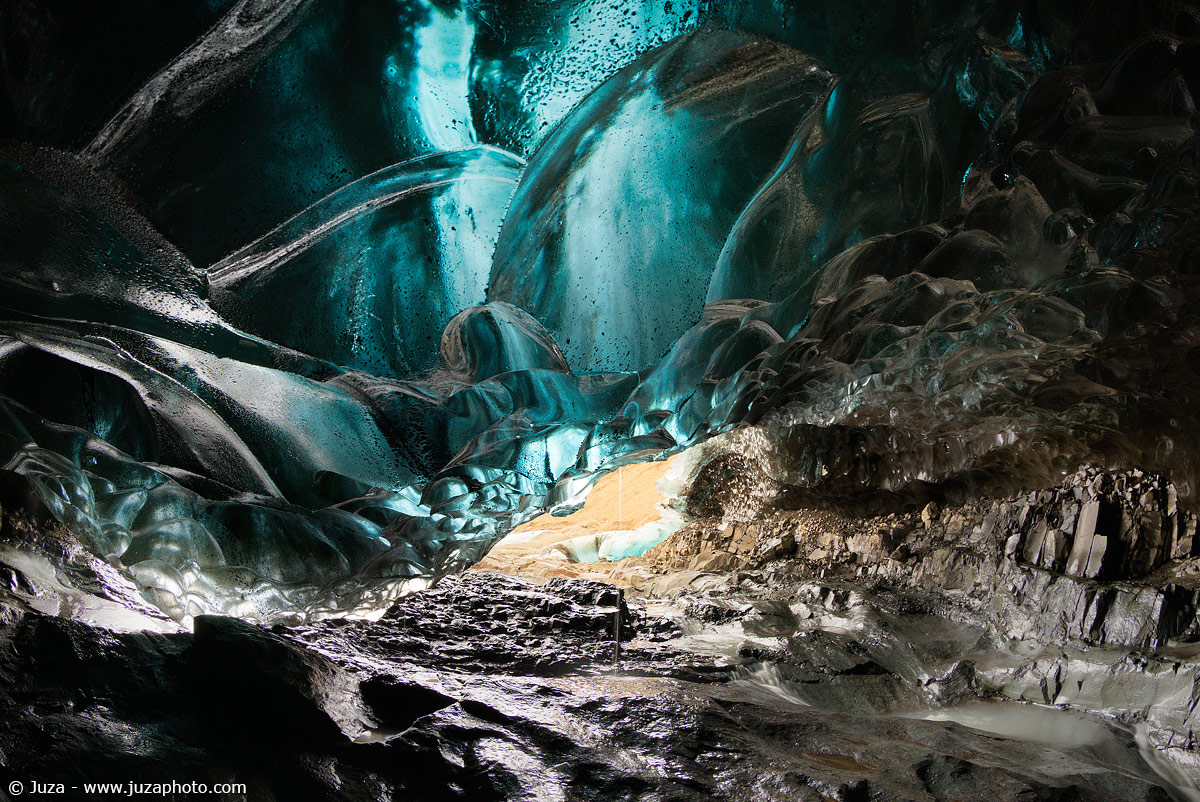 The ice cave was a challenging shooting situation. Since the temperature was move zero, the ice was melting and these was a continuous 'rain' of big, cold water drops; here the first Canon 6D got stuck, while the A7s kept working. I have chosen a fisheye lens to capture a lot of ice into foreground; I mounted the camera on my Manfrotto BeFree Carbon tripod and I composed the scene using the tilting screen of the A7s. I have used ISO 800 to get a faster shutter speed because there was a lot of water falling in the place where I have taken this photo, so I wanted to be as quick as possible to avoid getting the camera too wet. 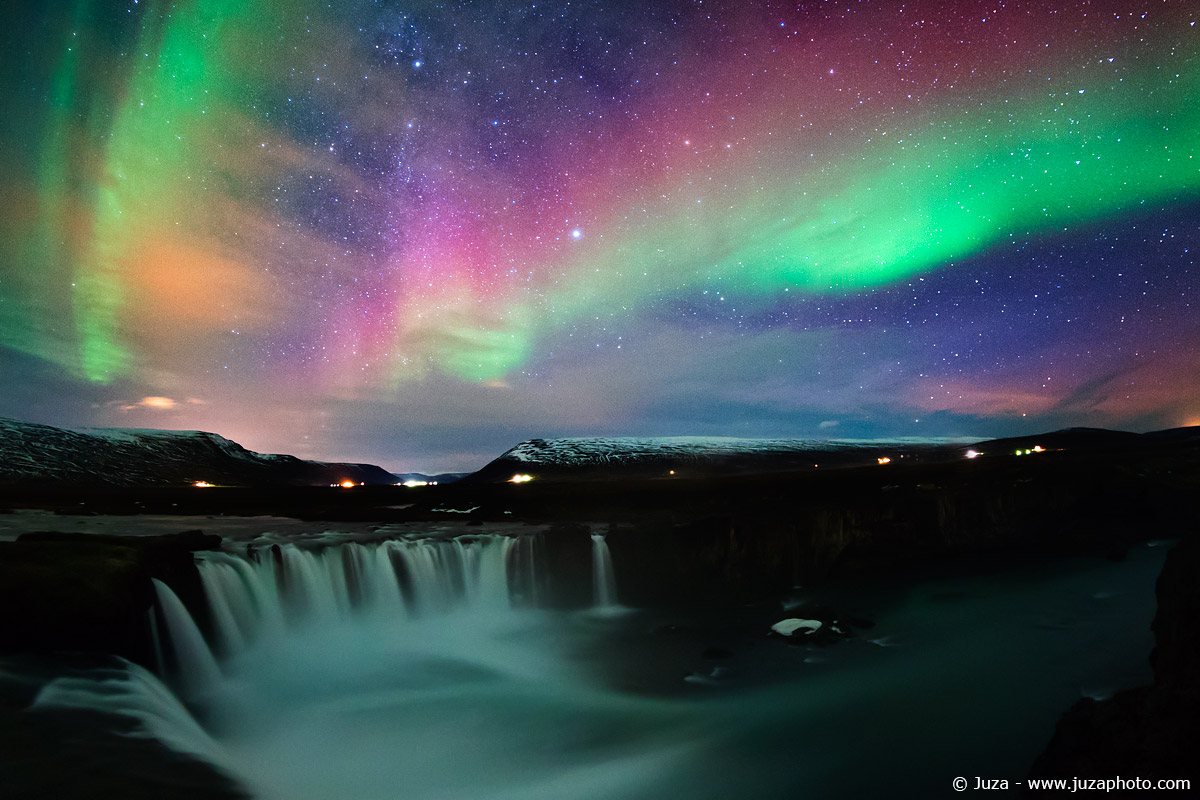 Taking photos close to a big waterfall, like Godafoss, is not easy because there is always a lot of humidity in the air: I had to clean the lens every two minutes, otherwise it got covered by tiny water drops that ruined the photo. The fisheye helped to capture as much sky as possible; by placing the horizon line in the center of the photo, it is possible to hide the distortion. I had to shoot at ISO 12800 to capture this beautiful norther light; even at this extreme sensitivity, the Sony A7s is still fully usable. 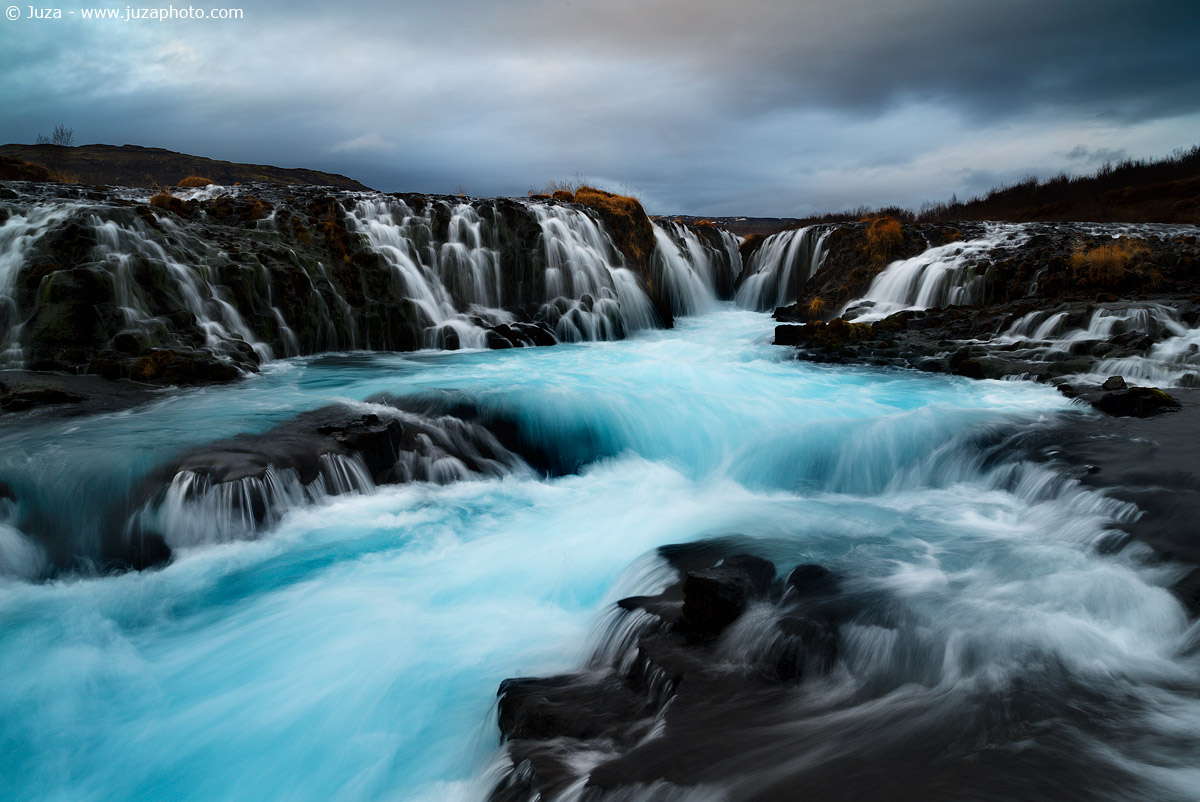 Finding Bruarfoss was far from easy - this little waterfall is out of tourist routes. It is not big, but it is beautiful because the water has two completely different colors, caused by a great difference of depths: on the sides of the river there are just 15-20 centimeters of water and you can clearly see the black rock, while the center of the river drops steeply to 2-3 meters of depth so the water takes a blue color. To take this photo, I have placed the tripod directly in the water; once again the tilting screen of the A7s was essential to compose the photo from a super low point of view. 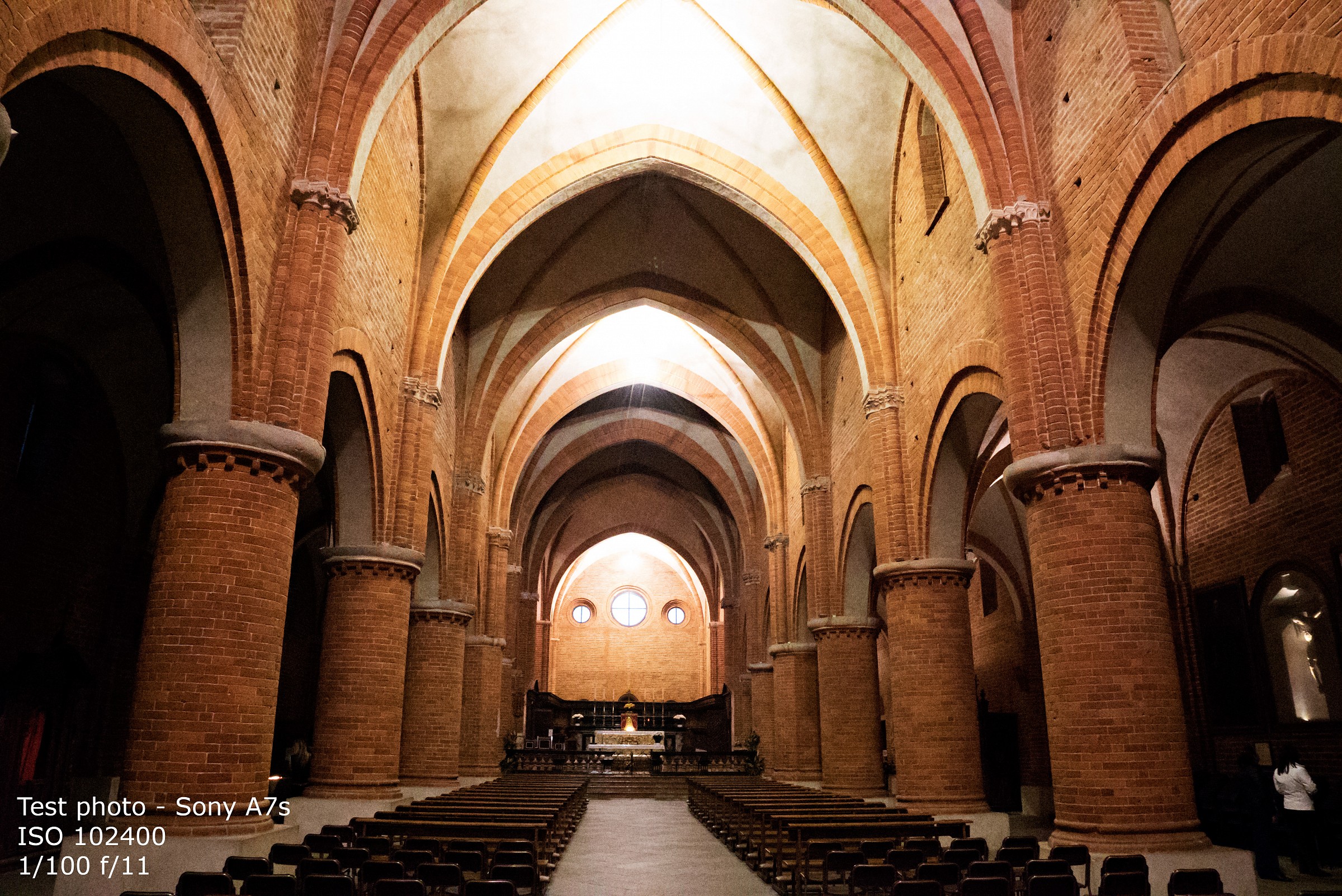 This last photo has been taken in Italy; it is a test to see if the most extreme sensitivities of the A7s are truly usable: well, in some situation, you can get surprisingly good results! Until few years ago it was unthinkable to take photos at 102400 ISO; nowadays, the Sony A7s and very few other cameras have made these sensitivities a reality, at least for some usages. You can click here to download the ISO 102400 photo at full resolution; of course there is noise, but it is not bad for such ISO.

The Sony A7s combines excellent image quality with an amazingly light and compact camera body; in my opinion, currently it is the best FF mirrorless camera on the market. Of course, that does not mean that it is perfect: the AF has a lot of room for improvement; the electronic rolling shutter is not as good as global shutter; a faster continuos shooting and the on-sensor image stabiliazion recently added to the A7II would be a welcome addition. The second generation A7s will likely be a more "all-around" camera, but in the meantime the A7s is already a dream camera for landscape, travel, weggind and reportage photographers.

You can find technical specifications, sample photos and user options in the Sony A7s page on JuzaPhoto!