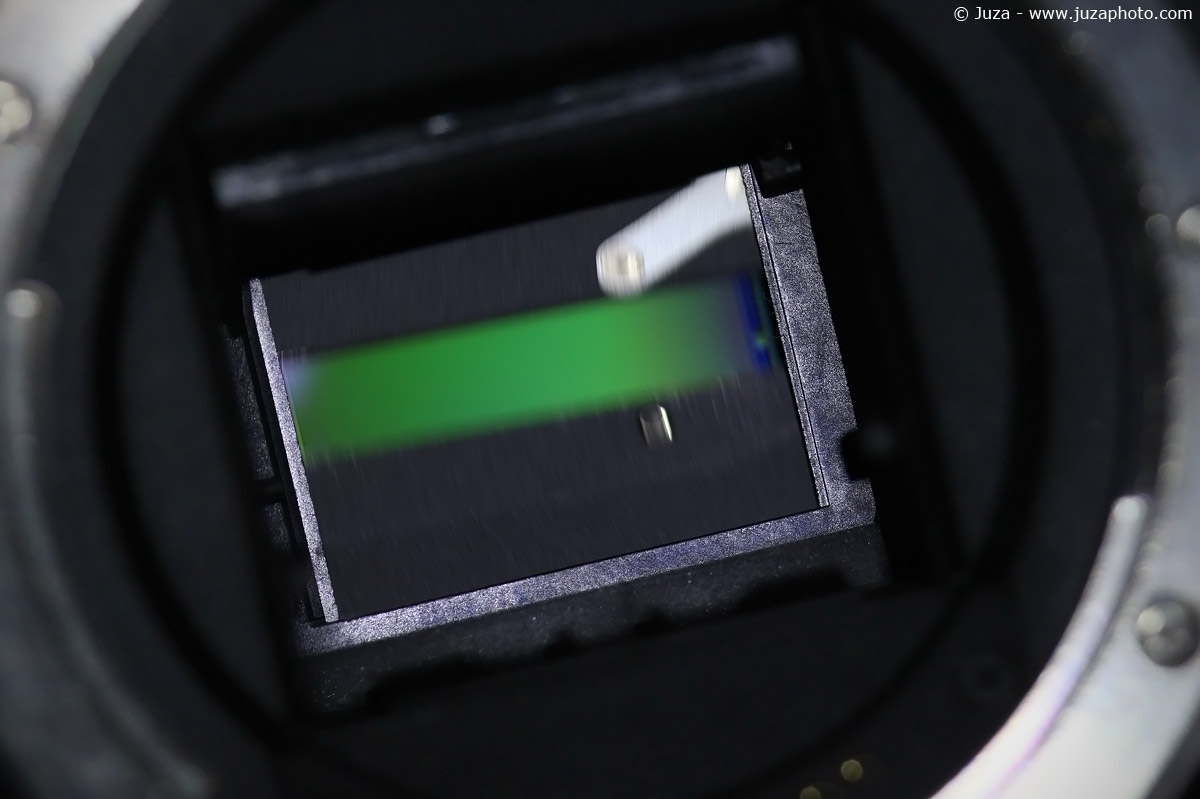 The mechanical shutter of a Canon camera, photographed during a fast exposure. As you can see, the upper curtain has already begun closing even though the first (lower) curtain has not opened completely yet.

Even though there are many types of mechanical shutters, those that are used in modern cameras are composed by thin curtains that quickly expose or hide the sensor. Exposure can happen in two different ways:

1) The first curtain opens and it exposes the whole sensor, then the second curtain closes and it terminates the exposure. This is possible only at slower shutter speeds: the fastest shutter speed that allows the camera to work in this way is the "sincro-X" or "sincro-flash" speed, and usually it is around 1/250 of second. When the shutter operates in this way, it is comparable to the global shutter of fully electronic shutters.

2) At fast shutter speeds, the second curtain begins to close while the first curtain is still not fully opened: the result is that the whole frame is not exposed in the same instant, but it is reached by light in slightly different moments (we are talking about extremely small fractions of second!). When the shutter operates in this way, it is comparable to the rolling shutter of fully electronic shutters. This may surprise you, because we usually associate the rolling shutter artifacts with digital cameras, but actually all film cameras used a (mechanical, of course) rolling shutter for photos taken at above 1/250!

The electronic shutter has several advantages in comparison to the mechanical shutter:

1) it is more robust and reliable, because there are no moving parts.

2) it is completely silent: if you are shooting in situations where the shutter noise may be a problem, for example some wildlife photos, theaters, street and reportage, the electronic shutter allows to be completely unnoticed.

4) it allows extremely fast shutter speeds: while most mechanical shutters tops out at 1/8000, electronic shutters can go far beyond.

5) it improves battery life because there are no moving curtains.

6) in mirrorless cameras, it improves autofocus speed and tracking, because the AF sensors (placed directly into the main image sensor) are always exposed to light.

1) Rolling shutter is very similar to the mechanical shutter: instead of capturing the whole photo at a time, it 'scans' the sensor from top to bottom. If you take a photo of something that is moving fast, the top and the bottom areas of the sensor will record it in slightly different instants, and the result is that it look distorted or 'skewed'. This problem could be eliminated if electronic shutters became as fast as mechanical shutters to scan the frame, but sadly we are not there yet: even very high end cameras still have rolling shutter artifacts.

2) Global shutter captures the whole photo in a single time, as mechanical shutter only does at slow shutter speed; electronic global shutter, instead, can do it at every shutter speed! Global shutter eliminates the artifacts of rolling shutter and it could effectively replace the mechanical shutter in every situation, but it has two downsides: it is more difficult and more expensive to make and it requires more circuitry in each photosite ("pixel") of the sensor, reducing the area available for light collection, so the images have a little more noise and less dynamic range.

Thanks to the improvements in sensor technology, as microlenses, the loss of image quality can be greatly reduced, but nowadays (2014) the prices of cameras with electronic global shutter are still very high: the Sony F55, for example, cost 30,000 US $.

Many consumer cameras currently on the market have an hybrid shutter, that can be used as only option or activated on request. For example, in Canon cameras the hybrid shutter, also called 'electronic first curtain', is used when you activate the 'silent shooting' mode.

The hybrid shutter begins the exposure using the electronic shutter, but terminates it with the mechanical shutter. It has the advantage of being more silent than fully mechanical shutter, it eliminated most of the vibrations and it has no rolling shutter artifacts. The downside is that it still requires the presence of a mechanical shutter so it has the limitations of this kind of shutter. 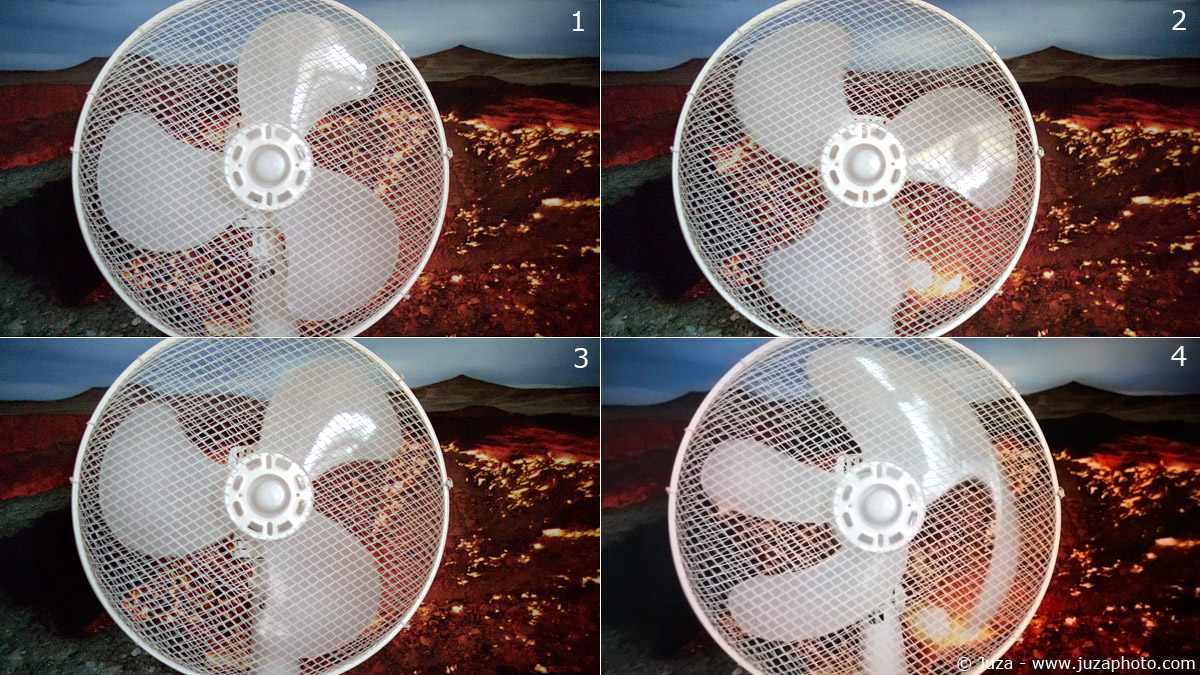 1) CCD vs CMOS: it is not true that only CCD can have global shutter. Actually, both CCD and CMOS can use global shutter, but while for most CCDs it is the standard, for CMOS it is more expensive and complex. That said, there are already CMOS with global shutter, as the sensor of the already mentioned Sony F55.

2) Shutter Speed vs Sensor Readout: with rolling shutter, taking a photo at, let's say, 1/4000 of second does not mean that you are actually freezing 1/4000s in your photo; it usually takes much more, so your 1/4000s exposure may actually take 1/100s or so. How is it possible?

You can select the shutter speed, that is the amount of time during which each pixel records the light, but not the sensor readout time, that depends by your camera. The readout time is the time required to 'read' the sensor from top to bottom.

In other words, if you select a shutter speed of 1/4000 and the fastest sensor readout of your sensor is 1/10, every pixel will record light only for 1/4000 of second, but the pixels at the bottom of the sensor will do their 1/4000 exposure about 0.1 second later than the pixel at the top. This is what causes the rolling shutter artifacts.


Nowadays, who is for?

Currently there are few DSLR and mirrorless cameras that offer the option of using the full electronic shutter even for still photos: Sony A7s, Nikon 1 cameras, Panasonic GH4 and few more. All these cameras have CMOS sensor with electronic rolling shutter.