Travel with the Fisker Karma

» » Travel with the Fisker Karma 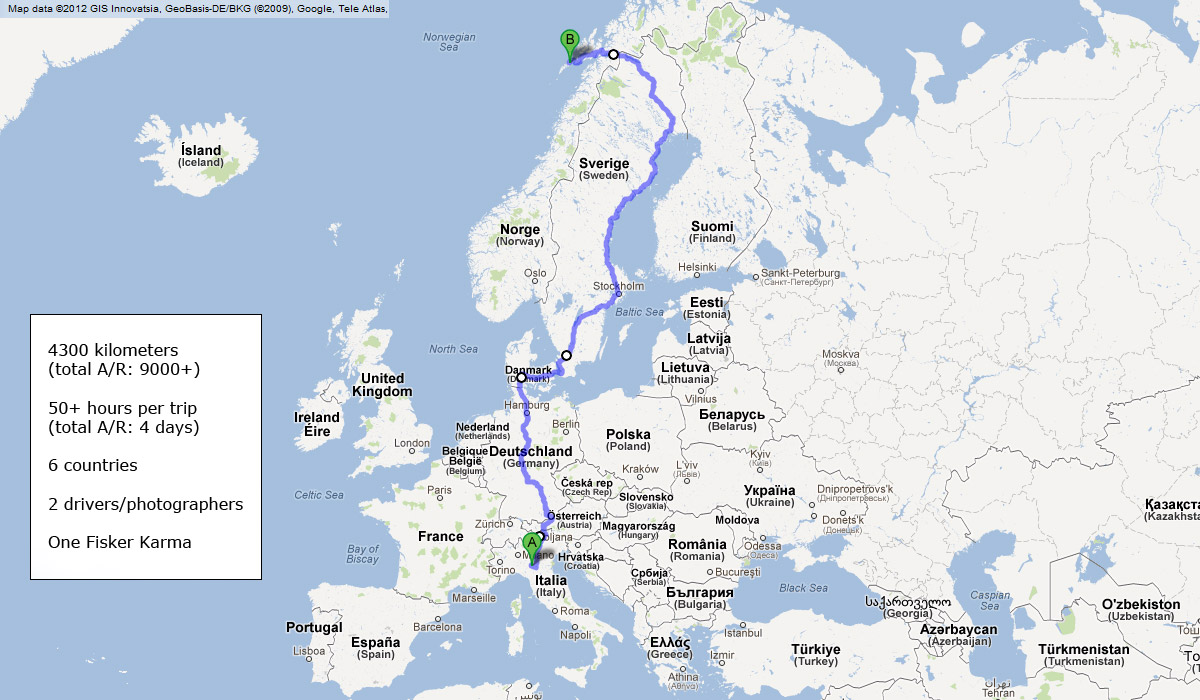 Norway has been the destination of my first big trip in 2007; I have been deeply fascinated by this country and I visited it again in January 2012. Next year, in January 2013, I'll be back again to take photos of the Northern Lights: this time the trip will be even more spectacular because I'm not going to travel with an ordinary car... we will drive for more than 9000 kilometers with a supercar, the Fisker Karma! In this article you can find all the details about the planning; the story of the trip instead will be published in a separate article.

The trip: from Parma to Lofoten

The trip begins from Parma, a city in the north of Italy. We will reach Merano, where we are going to mount special rims and snow tires, then we will drive for more than 4000 kilometers in about 50 hours to reach the Lofoten Islands, in the north of Norway. We will cross the mountains of Austria, the fast autobahn of Germany, the bridges between Denmark and Sweden, and the iced roads of Norway! We will never stop (except of course for refueling) during the trip. When one drives, the other one will sleep. The details of our trip plan:

Day one, early morning: departure from Parma. We take the A1 highway to Modena, then E45 towards Verona. We go on the E45/A22 until Bolzano, then SS12. In late morning we will be at Fisker Italia in Merano; we will mount the winter tires and after a quick lunch we take the SS44 towards Brennero.

Day one, early afternoon: we will cross the border with Austria. We take the A13, and after Innsbruck the A12; in a couple of hours we will be on the German border. Now there is the entire Germany! We will drive for more than 10 hours near Munchen, Numberg, Wurzburg, Kassel, Hannover, Hamburg...we will drive on a good part of the A9 and A3, and then the entire A7 until we reach the border of Denmark, at very late night.

Day two, night: my guess is that we will reach the Denmark around 1 or 2 a.m. By this time we will have driven for more than 1500 kilometers. We don't want to take ferries, so we take the E20 towards Odense and Copenhagen. After the Oresund bridge, we are in Sweden! In my previous trip I had chosen to cross the Norway, but this time we will drive on the coast of Sweden because the road should be a little easier.

Day two, early morning: we reach Stockholm. Now ice and snow on the road become very likely, so we will have to slow down a lot, I don't think that we will go faster than 60-70 km/h, unless the car handles better than expected. In my previous trip we found very long parts of the roads completely covered by ice! We will follow the E4 and we will drive near Gavle, Sundsvall, Umea.

Day two, late afternoon: we reach Lulea. 3300 kilometers have passed since our departure from Parma! There are "only" 900 kilometers left to reach Lofoten, but this is the most difficult part of the trip: we have to cross inland, mountain areas of Sweden and Norway. Here we can expect tons of snow, extremely cold temperatures and poor visibility.

Day three, night: at 2 or 3 a.m. of the third day, we should reach the border of Norway. We (slowly) follow the E10 towards the magnificent Lofoten Islands. In the morning, we should be near Svolvaer. We keep driving on the E10.

Day three, mid or late morning: after more than 50 hours driving and 4300 kilometers, we will have reached the tip of Lofoten! We are going to spend 5-6 days here. In January, there are just few hours of dim light, and during the rest of the day the sun is below the horizon: the very long night is the ideal condition to take photos of the northern lights. A photo of Northers Lights that I have taken during my previous trip.


[TITOLO2] Photo gear and other equipment

This is the full list of the equipment that we are going to use!

Camera: Canon 7D, Canon 1DX, Canon 1D Mark IV. I always use the 7D as my main camera, but it is not the best choice for low light and high ISO shooting, so for many photos I'll use the 1DX or the 1D4 (I have not bought these cameras, they are the cameras of my travelmate :-)). Other than that, for some photos and for many videos I'm going to use the 38 megapixels Nokia 808 camera phone.

Tripod: Manfrotto 055 X PROB, Manfrotto 486 RC2, GorillaPod with GripTight. The 055 is quite heavy, but it is not a problem since we travel by car. The 486 is a good ball head that I always use for landscape. My friend will bring his Gitzo tripod, but personally I prefer Manfrotto, in particular in cold temperatures: when you have large gloves, the knob system to lock and unlock legs is easier to use than the ring system of Gitzo tripods. I'm going to bring also the small Gorillapod for photos and videos with the camera-phone.

Backpack: I'll bring only my small "Seven" backpack. It is a very simple backpack that I use when I don't have to walk a lot; since we will move mainly by car, I won't bring my large trekking backpack.

Computers: Apple iPad, Dell XPS 12. My friend will bring his iPad while I'll use the XPS 12, a laptop/tablet hybrid. During the trip we will post short updates, while in late January I'm going to publish a full article about the trip.

GPS: We will try to use the navigator of the Fisker Karma. In case it gives problems, we have also a Nokia 808 with Nokia Maps (offline) or the iPad and iPhone with Google Maps (online).

Dresses: Heavy jacket and trousers, gloves, trekking shoes, Blazerwear heated socks. Of course we will bring heavy stuff, since the temperatures are cold and we will stay a lot of time outdoor. The main problem is to keep the feet warm; this year we are going to use heated sock from Blazerwear: they are expensive but I think that they will help a lot.

Food: A lot of pasta and condiments :-) Since there is a kitchen in the hostel where we will stay, we are going to cook by ourselves. Why not a restaurant? Because after hours between ice, snow and freezing temperatures, there is nothing better than coming back in our warm hostel and cook a ton of delicious Italian pasta!

The Fisker Karma (that you can see ] in this gallery) is a piece of art on four wheels. Usually I use this description only for Lamborghinis and Ferraris, but this car really deserve it... it is truly awesome. The car that we will use during this trip is owned by my friend Titino, but ] Fisker Italia and ] GP Supercars & More sponsored the trip by offering the winter rims and the snow tires (they are extremely expensive!). Let's give a look to the specs!

The Karma is 5 meters long, 2.13 meters wide and just 1.33 meters high. The tyres are 285/35/22 for the read and 255/35/22 on the front. It has two 200-horsepower electric motors, plus a 200 hp generator that recharges the batteries (you drive in full electric mode for about 80 kilometers). It reaches 100 km/h (62 mph) from standstill in about 6.6 seconds, that is a respectable acceleration, even though it is not super fast. Other than that, the Karma includes a lot of technology; some highlights are the solar panels on the roof and the 10" touchscreen. Prices range from 100,000 to 120,000 €, depending by configuration. 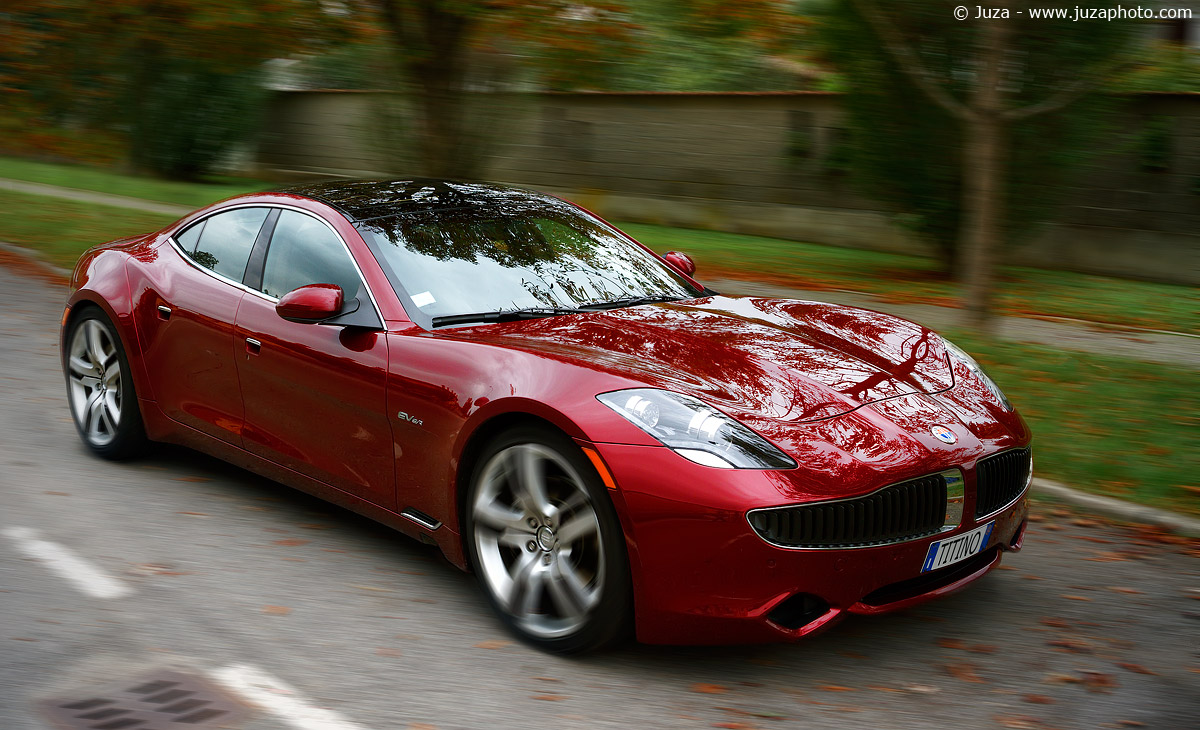 By the way, if you are wondering about the meaning of the "Titino" plate, Titino is a character of the movie "[URL=http://www.imdb.com/title/tt0063508/plotsummary ] Riusciranno i nostri eroi", an old Italian movie with Alberto Sordi and Nino Manfredi. The movie is the story of a man that escapes from Europe to Africa to live a more fulfilling life; Titino is a symbol of adventure, exploration, and freedom, so I think it is a great nickname for this trip. It is also the "stage name" or my friend and travelmate.

Challenges and purposes of the trip

1) Take awesome photos of Aurora Borealis and landscapes of Lofoten. The Fisker Karma will be the subject of many photos, too :-)

2) Reach the Lofoten Islands (from Parma, Italy) in little more than two days. Overall, the trip last ten days, and we want to spend no more than four days driving. It won't be easy (snow, ice and mountain roads mean slow speeds) but it will be a very fascinating experience. Two days to drive between six countries and more than 4000 km!

3) Test the Fisker Karma in every driving conditions: from the high speeds of German highways to the iced roads of Norway and Sweden. In some areas, we will have to face temperatures of -30 celsius degrees (or even lower: some villages of Norway held the record of coldest places of Europe, with temperatures under -50 degrees). How long will the Karma batteries last in extreme cold? How is like driving a 2.4 tonnes, rear well drive, wide-tires car on ice and snow? We will see :-)

4) Stay within a low budget. We are going to bring all the food from Italy, we will cook by ourselves and we will sleep in hostels.


UPDATES DURING THE TRIP 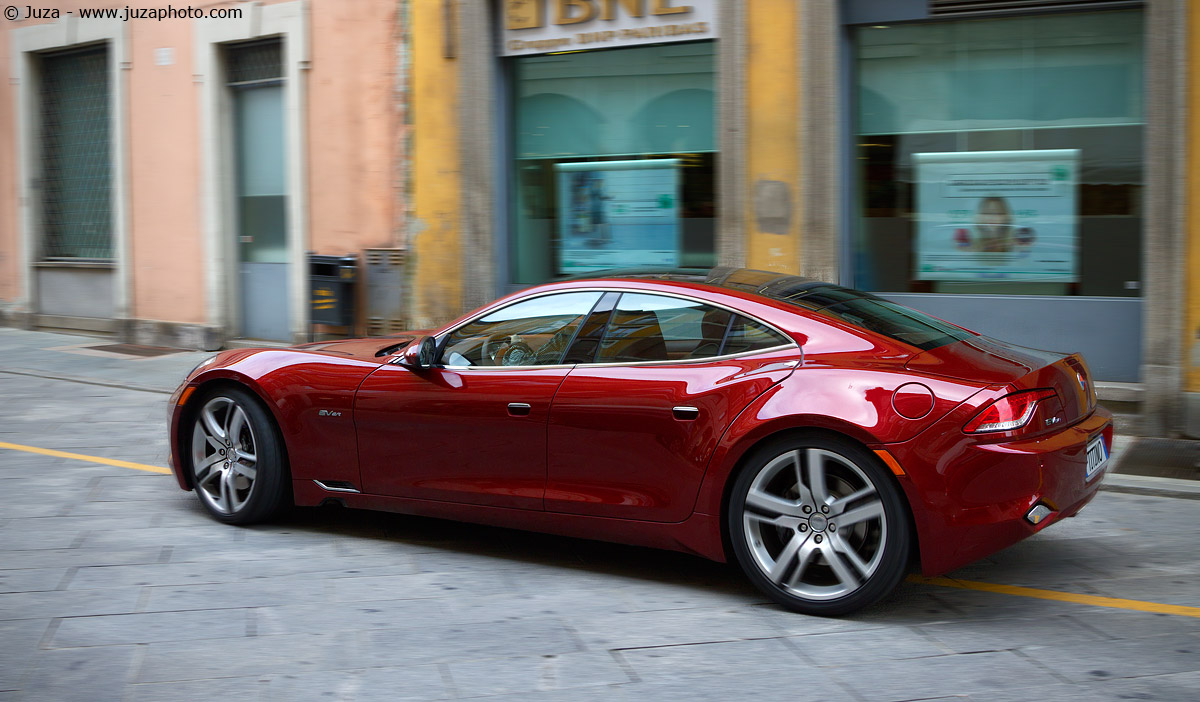