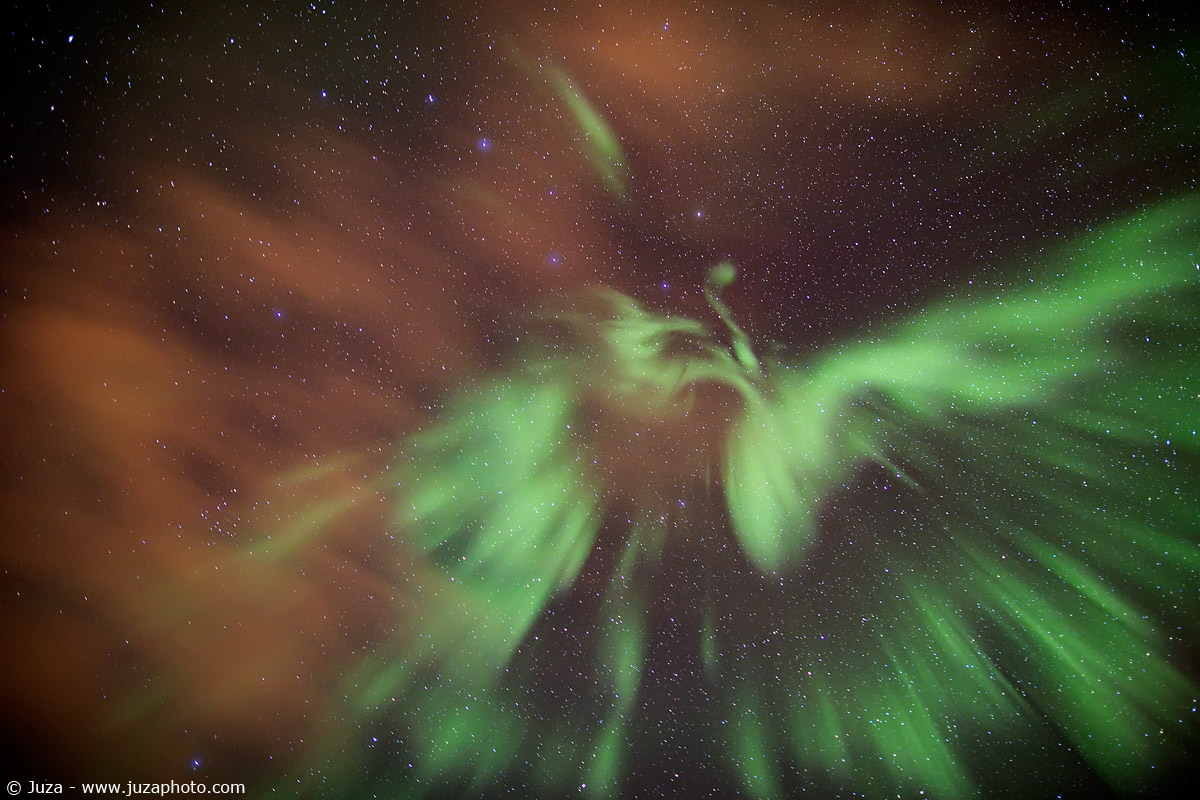 
The 'corona' is one of the most spectacular aurora displays: when it happens, it looks like an explosion of colors in the sky. In my second winter trip to Lofoten, I had the luck the see it twice! The photo above is my favorite from that trip.

In spite of its spectacular look, this was actually a quite faint aurora. It was clearly visible and beautiful even by the naked eye, but it required a bright lens and very high ISO - here I used the 1DX and the Canon 24 f/1.4 stopped down at f/2.0 to get better sharpness. The positive aspect of faint auroras is that they don't move too quickly, so you can get good photos even with shutter speeds of 20-30 seconds: stronger auroras usually moves very fast and they requires shutter speeds of no more than few seconds, otherwise they appear as a green blur in photos. At the beginning of our trip, we feared that it would have been a bad week for aurora, since the aurora forecast was around 1-2 (low) in a 0-9 scale...but I think that this photos clearly shows that even with a similar forecast you can get great results, if you have a camera capable of high ISO.

Another thing that we learned is that a bit light pollution is not a problem for this kind of photos. Of course, you can't take great aurora photos in the middle of a city (unless there is a super strong aurora), but a place as Lofoten islands, that has many small little villages, is perfect. Many times the warm light coming for villages and houses creates a beautiful contrast with the dark, cold tones of the sky. This photo has been taken at few meters from our hostel, in Ballstad, and the light of the village creates an orange glow in the clouds: I think that it balances well the green aurora.

Thanks to the bright aperture of the 24mm and the high sensitivity sensor of the Canon 1DX I was able to use live view for focusing (of course you need manual focus); I easily focused on the stars and I begun taking photos with various shutter speeds and ISO, in full manual mode. It is impossible to predict the exact exposure for the aurora, you have to find it by trials and error, even though with experience you can get close the the right settings for the beginning. Once I found the best setting, I toke many photos with the camera pointed directly towards the sky - usually I prefer to include some foreground but here it was not possible, since the aurora was exactly above us. Every photo is different, the aurora keep slowly moving and changing; I have chosen this one because its shape reminds me of a phoenix.